Posted by Kathy Hannah at 10:50 AM No comments:

A Peaceful Ending for the 2022 Nesting Season


We know that many of our birds stay in the Wrightsville Beach area until November.  Each year it appears that they “stage” i.e., wait for others to make it down the Atlantic coast to our area and then leave together in large flocks. The photo above was taken on September 2nd at the north end of Wrightsville Beach and shows hundreds of Black Skimmers gathered by the inlet.

The posting was removed by a group of Wrightsville Beach Stewards on September 6. Almost all of our chicks had successfully learned to fly and had left the colony.  They will continue to practice their new skills as they get ready to head south. 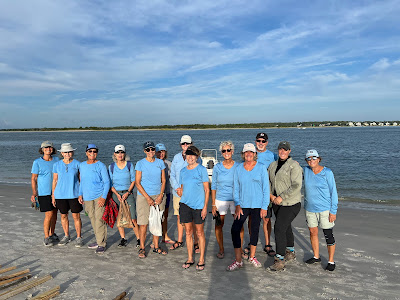 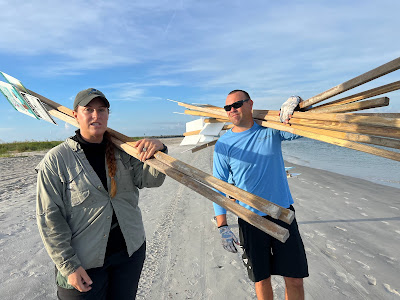 Throughout the summer we were able to band 110 Black Skimmer chicks. Some of our Black Skimmers have already begun the trip South.  We recently received a text from a SC Bird Steward, Alice Belanger.   Our steward, Jin Bian, met Alice this summer when she was visiting our nesting colony and photographing our birds.

Alice sent photos (see below) taken on Sunday, 8/28 in Huntington Beach, SC of Black Skimmer fledglings that were banded. She wanted to know if they might be our Black Skimmer fledglings, C23 and C45…AND THEY ARE!!!!  The fledglings were photographed with adult Black Skimmers (parents!!) and several Royal Terns.  The news made us so happy and reinforced how much information we can receive from the process and effort of banding birds. 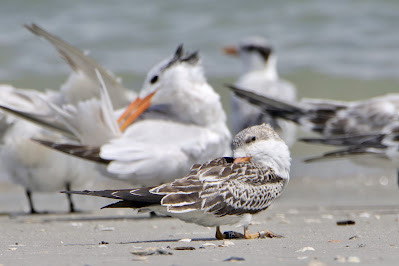 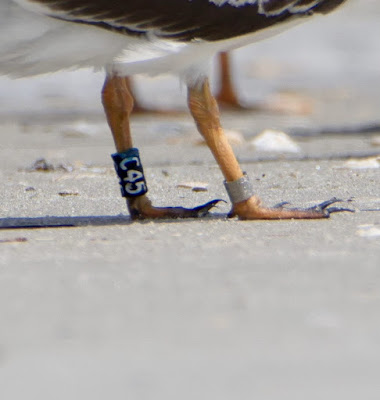 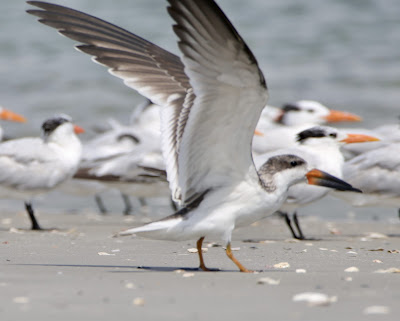 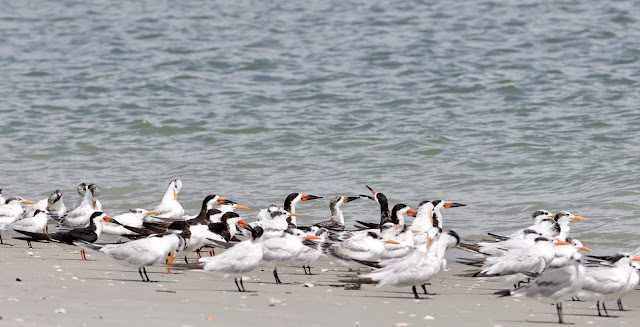 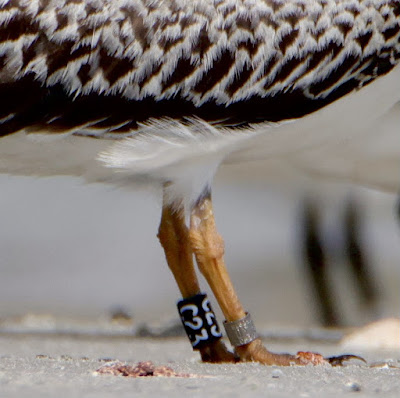 So with treasured memories of our successful colonies of Black Skimmers, Least Terns, and Common Terns this summer we are already eagerly waiting to do it all again in 2023!

Posted by Kathy Hannah at 8:19 AM No comments:

We are approaching the end of the nesting season and the bird posting has been pretty quiet.  But.....

We still have young Skimmers hiding in the heavy vegetation and groups of Black Skimmers continue to roost in the posting.   The bird posting may be quiet, but important bird activity is happening in the area of the south end, Masonboro Inlet, Masonboro Island, the north end of Wrightsville and the local tidal creeks!!

We have a small group of Black Skimmers caring for chicks in the oceanfront area of the posting close to the point. These photographs and videos were taken in the last two weeks and each has it's own story to share.


Videos are a great way to not only watch but a chance to listen to the activity!

All of the Least Terns AND Common Terns have left the posting, but training of fledglings in fishing and strong flying skills is happening as they prepare for migration.  Feeding of fledglings by the parent birds will continue through migration as they improve their own fishing skills.

Least Terns and Common Terns continue to fly over the south end with fledglings and fishing continues in the inlet and along the Wrightsville Beach coast line. 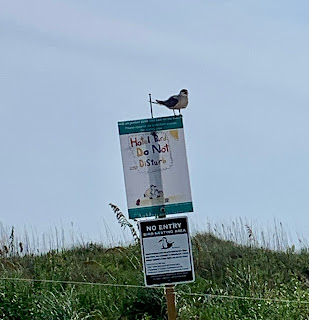 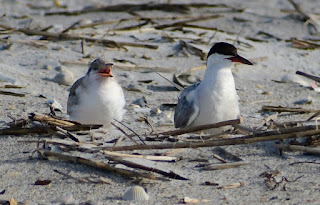 OYSTERCATCHERS AND OTHER GUESTS

The Oystercatcher pair returns to the south end generally two hours before and after the High Tide time… and around mid-tide.

Royal and Sandwich Terns, as well as other migrating species, can also be found in the area. 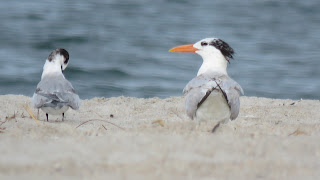 Going back to see some of our earlier posts will give us a chance to check out what happened with nesting this summer!

Posted by Kathy Hannah at 9:44 AM No comments:

Black Skimmers can still be seen feeding the last of their chicks. But it is becoming apparent they have started leaving...fewer birds every day. Yet the colony still finds ways to entertain us.
This video was made on Sunday, 7/31.  And Thursday, 8/4, only 2-3 dozen Black Skimmers were seen in the colony. In a successful colony the birds will begin their migration once their chicks can fly.


Notice the bands on the Black Skimmers in the next two photographs.

Some of our NC Audubon staff and a few Wrightsville Beach Bird Stewards got together Monday (8/1) morning to band some more Black Skimmer chicks. Data collected will give us an opportunity to learn more about these magnificent birds and to see if any of them return in years to come.
( all banding photos by Tom Hanna) 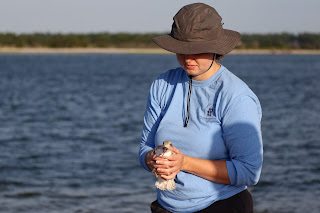 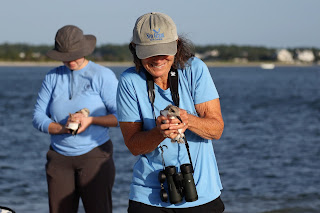 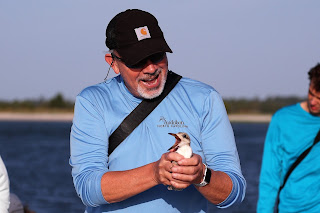 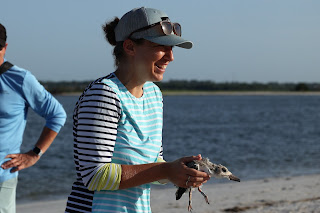 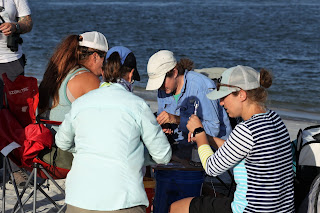 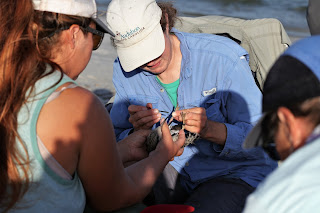 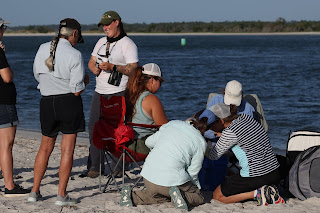 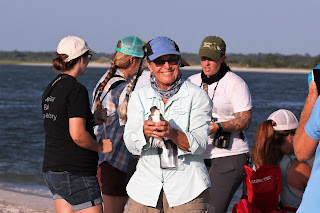 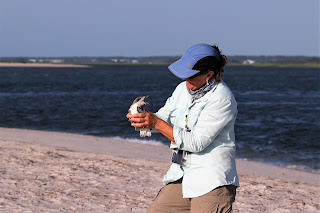 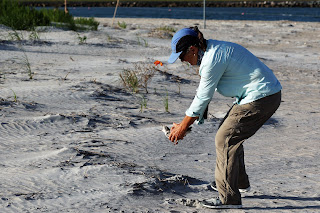 As the Summer Heats Up the Colony Continues To Grow

The chicks we band are approximately 3 weeks old…old enough that they are growing their feathers and not downy, can tolerate being held by a human and not flying yet.  We were so happy to have so many skilled helpers to weigh and measure each chick’s total head measurement including its bill and wing chord.  Only experienced individuals may go into the colony with Lindsay (Audubon NC’s Coastal Biologist) to find the chicks as they hide very well in all the vegetation.  It was especially important because more nests (with eggs) and newly hatching chicks were seen in the colony.

Black Skimmers Show That Protecting One Beach Is Not Enough

Black Skimmer and Common Tern chicks have been hatching throughout the colony this past week and chicks are running around.  We have a nice variety of chicks including older chicks that have developed their flight feathers and are beginning to fly. It is very entertaining to watch Black Skimmer parents “coaching” (encouraging) their chicks to fly using a fish for incentive! Watch the shoreline for both parents flying with their chick who is just taking off.

Parent Black Skimmers are also escorting their chicks to the water and the reaction of the chicks to that first feeling of water is priceless…. get your binoculars out and watch them up close.

Watch for parent birds returning to the colony with fish and they will lead you right to their sweet chicks.  Feeding chicks is energy intensive for the parent birds.

Common Terns have a unique behavior to spread out their chicks when feeding by making the chicks chase the parent coming in with fish so the biggest chick is not always the one to get the fish.  I am so impressed with the Common Tern…they seem to know how to raise 2-3 chicks to fledge!

A few Black Skimmer and Common Tern chicks hatched this past week on the inlet side of the posting.  Thank you to all of our beach guests who help reduce disturbance in the colony. This  continues to be important because of the added heat stress during these hot summer days.

There is a nice variety of chicks in the colony right now. Older chicks have developed their flight feathers and are beginning to fly and learning to skim. 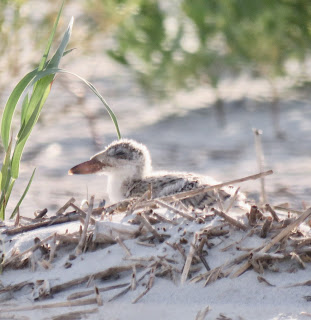 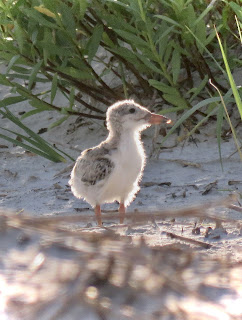 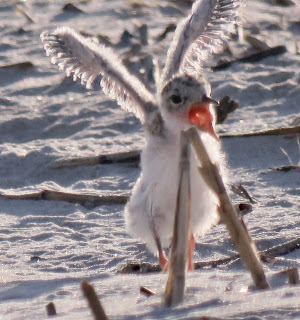 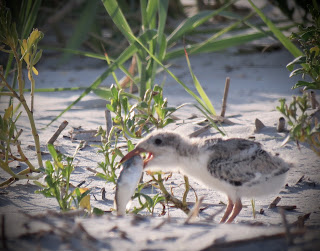 Looking forward to seeing you at the beach! 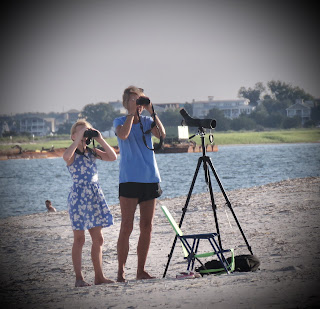